Come here to voice your comments, concerns, and questions with the mayor and their aides!
Post Reply
45 posts

It's been three years, but here it is!


I appologize if bringing up the Regisville story arc yet again if it annoys you, but I feel it is a very important period from our town's history and must be understood. Besides, I have Catspaw's permission.

Also, it's not like I decided "Hey, I'm going to bring up a three year old issue for no reason." I actually have meant to do this since the end of the arc, but never got around to posting it. But it's ready now and it just happens to exactly be the three year anniversary, so here it is.


For those of you who remember the Regisville arc, you know why Fenix is connected with it.

For those who don't, here is a brief recap. (for the full thing, check out the links at the end of this post)

Dr. Blackgaard was brought back to life and became the mayor of The Town Of Odyssey, renaming it Regisville. His running mate was Fenix, but after winning the election Dr. Blackgaard decided that Fenix had served his purpose and put him in jail. Some members pooled their money and bailed him out, only to have Dr. Blackgaard send him back to jail, and raise the bail. There Fenix remained for the rest of the arc.


The following is an interview I, bookworm, conducted with Fenix only hours after the story arc was brought to a close. It was so soon after in fact, that Fenix was still in jail. The interview was conducted via private messaging from the 18th to the 23rd of September 2006.

I hope that the following questions and answers bring enlightenment to any questions you may still have concerning what I believe was our most complicated arc yet. I know they did for me.

bookworm:
Did you have any previous knowledge of what would happen if Gabriel won the election?


Fenix:
I knew what would happen to an extent. Some things I didnt know about.


Fenix:
Yes I knew that all along.


Fenix:
Everyone of them.


bookworm:
That the board would be transformed to Regisville?


Fenix:
Yes I knew that I knew pretty much everything.


bookworm:
Are you going to run for office for real sometime?


bookworm:
Is there any truth to the rumor that you not only knew that Blackgaard would take over, but actually were the Dr. himself?


Fenix:
It was one of his first post. I really dont remember it.


bookworm:
Do you control any other NPC's?


Fenix:
Nope none at all.


bookworm:
Do you take part in other story arcs, or is this the first/only one?


Fenix:
I do not.
This is the first and probably the only one.


bookworm:
When will you be freed from prison?


Fenix:
Yes I will one day.


bookworm:
You don't know when?


Fenix:
When my personal life gets less busy I ll be out.


bookworm:
Am I allowed to disclose our conversation to others?
Thank you for your cooperation, patience, and honesty.


Fenix:
tell who ever you want its ok i dont mind


This concludes the interview section of this topic.

Thank you for putting up with me talking about this arc once again.

I would now like to use the remainder of this post to upload the avatars and signatures I have created to commemorate this story arc.

I am not looking for complements, I just want to have a place to display them. It's for my own purposes more than anything else. (although complements are welcome

) I made these about three years ago, right after the arc ended.

Thank you again for your attention (if anyone actually read any of this) and unless something else comes up, this concludes my commentary on The Regisville Story Arc.

Signature with story arc links
(This has been my signature for the past three years. You can't use this anymore, the new board only supports five links, so when I changed my sig to add the interview info I couldn't put it back, but it's still a nice recap)

NOTICE
Catspaw has graciously agreed to move this into the Regisville forum after a while, so it can be stored with the other topics about the arc.
However, that forum is locked, meaning once this is moved in there, no more posts can be made.
Therefore, it is going to remain here for people to comment on, until posts have stopped.
If you have comments or questions, please post them now while you can.

Decided against in order to keep this available for further additions/comments.
Thanks anyway Catspaw!
Last edited by bookworm on Fri Jan 07, 2011 3:19 pm, edited 6 times in total.

Huzzah! That definitely took me back.

Yeah, Corey and Fenix are friends in real life or something right? So he got all the juicy info!

It's great to see the interview! It definitely brings back memories!

Thanks for sharing your interview with us, bookworm!

What prevented you from posting this approximately 3 years ago, may I inquire? That is some extreme procrastination! Perhaps you should dig up the "Procrastination" thread wherever it is now...

KODY 105 wrote:What prevented you from posting this approximately 3 years ago, may I inquire? That is some extreme procrastination! Perhaps you should dig up the "Procrastination" thread wherever it is now...

...does it matter? At least they did the interview!

KODY 105 wrote:What prevented you from posting this approximately 3 years ago, may I inquire? That is some extreme procrastination! Perhaps you should dig up the "Procrastination" thread wherever it is now...

...does it matter? At least they did the interview!

It does not to me, but I was not around when the first story arc happened. Did not many people already move on who would have profited more from this interview than I do?

But it has more nostalgic value now! It's retro. Everything old is new again!

Plus time has settled some of the related emotions, and that can only be a good thing.

That all sounds very cool!

Note: My past posts do not necessarily reflect my values. Many of them were made when I was young and (in retrospect) misguided. If you identify a post that expresses misinformation, prejudice, or anything harmful, please let me know.
Top

KODY 105 wrote:What prevented you from posting this approximately 3 years ago, may I inquire?

No you may not, but I will answer anyway.

It was certainly unintentional.
As I said, I conducted it right after the arc, but it needed some work. Organizing and such I mean. (Neither Fenix or I used the quote feature, so the messages were all out of order)

Shortly after the arc, my personal life got very busy, and the computers started acting up. This combination led me to an unplanned absence which only ended a short time ago. (I explained this all in my "I'm back" post, but that is deleted now it seems)

Anyway, when I finally got back here I went to work sorting through the questions and answers. (I had saved them all) and I asked Catspaw whether it was worth even bringing up, because I realize how long it has been. She assured me that it was still worth it, so I finally got the messages in order, added some things to the end, and here it is.

I finally completed it about two weeks ago, but waited to release it until the exact anniversary. I thought it was a nice touch.

Also, I no longer have internet access at my home, so opportunity to work on this/post it was limited.

Anyway, is that a satisfactory explanation?
I just thought people would like to read it. If you have problems take them to Catspaw, she gave the "go ahead."

Yes, please feel free to blame me for everything.

But I see no need for complaints - I think it's great to see this. It brings back some memories, that's for sure!

I thought I was done, but I was wrong!

In browsing my Regisville Arc archives, I discovered something I’m sure all of our citizens will want to see, especially those who were here when it happened.

You are about to see exclusive screenshots from the beginning of Regisville!

These were taken by me, when the Town of Odyssey was first taken over.
They have never been seen by anyone else, and I do not know of anyone else with such pictures.
No one else may have even seen this in person!

Here’s the story:
I was extremely fortunate to be in our town when Dr. Blackgaard took over. I was kicked out of the site, and got a message.
I kept refreshing, and a few minutes later the layout changed! It was all black and red and... the rest is history.

When I saw the message, I knew something big was happening and had the sense to take a screenshot. When the layout changed, I took one of that too.

I have not heard of anyone else having anything like these. I don’t even know if anyone else personally witnessed the change.

If you were there, please let me know. I would love to know I was not alone in witnessing the biggest event in our history.

These pictures have recently been made even more special because the Regisville theme is no longer available.
After the arc, it was still an option in board settings, but not on this new site.
Because of this, I am also uploading a screenshot I took after the change was completed, showing what the new theme looked like.

Anyway, without further ado:
The Exclusive Regisville Beginnings Screenshots!
Never before seen by anyone else, and unable to be seen anywhere else! 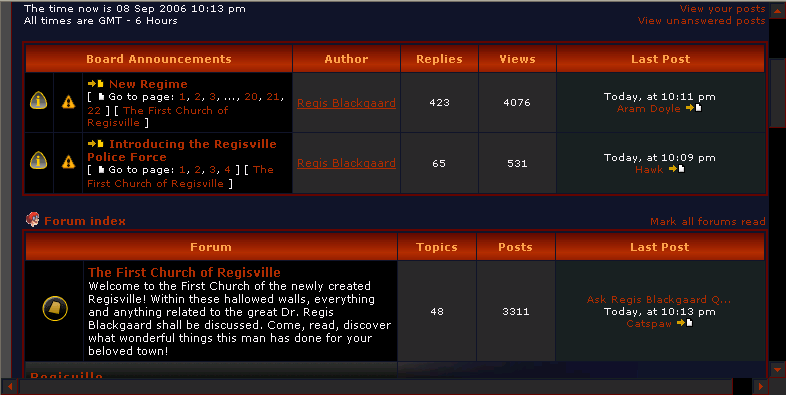 i'm hiding a flag here sorry for the interupption.
There is a ToO Conspiracy going on. Go to City Hall and read about it before it's deleted, and help discover the truth.
Top

Samurai Neil
Popsicle kid
Posts: 486
Joined: May 2009
Location: Exactly where I am!

Cool screen-shots! I wish I was smart enough to take them when it matters.
COMING SOON: RANDOM ECONOMY TEXTBOOK QUOTES
Top

"Dr. Regis Blackgaard has taken control of the Town of Odyssey. Please check back soon!"


Brilliant. All it needs is a

Whoa, that brings back some interesting memories!

It's so cool that you found those, bookworm! Thanks for sharing the screencaps with us!

Pseudonym wrote:Brilliant. All it needs is a

Catspaw wrote:It's so cool that you found those, bookworm! Thanks for sharing the screencaps with us!

Yeah, I cannot believe I was fortunate to actually be there.

As I recall (and I could be wrong, it was so long ago) it was midday sometime, so I wouldn’t normally be on.
But for some reason I was like “I think I’ll check on the Town” and got on and was trying to reply to something and that came up.

I never think to take screencaps of stuff. I don't actually think that I was online when the switch happened...I can't remember. But I know for sure that I wouldn't have though to take a screencap if I was online!